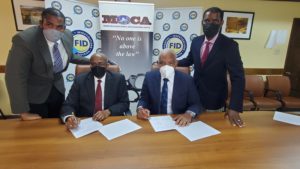 The Major Organised Crime and Anti-Corruption Agency (MOCA) and the Financial Investigations Division (FID) today signed a Memorandum of Understanding (MoU) aimed at strengthening both organisations’ response to, among other things, money laundering, organised crime, fraud and financial crime. The MoU was signed by MOCA’s Director General Col. Desmond Edwards and the FID’s Chief Technical Director Selvin Hay during an event staged at MOCA’s Oxford Road office in Kingston.

This MoU will enhance the effective working relationship between FID and MOCA and deepen the areas of collaboration between the organisations. These include, but are not limited to:

FID’s Chief Technical Director Selvin Hay said, “The mandates, responsibilities and functions of the FID and MOCA are complementary – tackling public sector corruption, removing the profit from crime and disrupting organised criminal networks. MOCA is the FID’s closest partner; both organisations have always enjoyed an excellent working relationship and this MoU solidifies that. 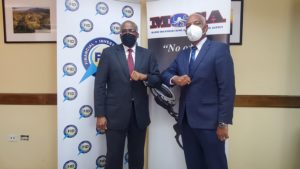 We anticipate that under this MoU there will be increased use of the Proceeds of Crime Act (POCA) by our MOCA counterparts. It is a powerful piece of legislation which should be readily used by all law enforcement agencies. When applied more robustly, we can expect to bring more criminal organisations and individuals to justice.”

Meanwhile, Director General of MOCA Col. Desmond Edwards noted, “This MOU will formalise a longstanding relationship between MOCA and the FID, two agencies with a primary mandate to take the profit out of crime. It will allow for greater synchronisation of our efforts while further strengthening our existing relationships.

The MOU will also create better utilisation of the finite resources available to both agencies and give greater leveraging of information and  intelligence relating to significant financial investigations.”

A 61-year-old Manchester businesswoman was recently (May 4, 2022) Read more

In a press conference held on March 10, 2022, the Financial Read more