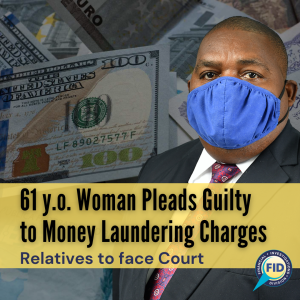 A 61-year-old Manchester businesswoman was recently (May 4, 2022) convicted on money laundering charges in the Corporate Area Parish Court (Criminal Division) in Half Way Tree.

Eva Mae Sterling, pleaded guilty to two counts of ‘Engaging in a Transaction Involving Criminal Property’ contrary to section 92 (1) (a) of the Proceeds of Crime Act, 2007 (POCA). She was fined J$300,000 or nine months imprisonment on one count, and 12 months imprisonment – suspended for 24 months – on the second count.

The Financial Investigations Division (FID) has commenced the process for the Supreme Court to consider and assess Sterling’s full benefit from her criminal conduct/lifestyle, estimated to exceed  J$100M. She was granted bail in the sum of $700,000. The matter is set to be mentioned in  the Home Circuit Court on May 17, 2022 for asset forfeiture proceedings.

Sterling’s son, Nicholaus Chang, and sister, Marline Ledford, both business proprietors facing similar money laundering charges pleaded not guilty when they appeared before the court along with Sterling. Chang and Ledford are scheduled to return to Court on June 15, 2022.

In commenting on the case, the FID’s Principal Director, Keith Darien said, “Families must take due care when managing or investing funds for their relatives especially when the source of funds is unknown or questionable. It is unfortunate when you have to prosecute so many members of one family but we stand resolute in our commitment to ensuring that crime does not pay.

The FID will utilize POCA to pursue facilitators of money laundering, particularly wealth generated from transnational organized crime activities; these activities deal significant damage to the country’s reputation. We have observed the unfortunate abuse of a booming real estate sector for laundering of the proceeds of crime. The FID along with other law enforcement partners is proactively monitoring the sector to mitigate its elevated money laundering vulnerabilities.”

He added, “Partnership is important in achieving our mandate and we must thank our overseas law enforcement counterparts for their collaboration with the FID on this significant financial crime investigation which occurred in the USA and Jamaica.”

Background
The results of local and international investigations revealed that between 2011 and 2014 the trio of Sterling, Chang and Ledford conspired to, and engaged in, money laundering such that the proceeds from drug trafficking (approximately J$228M) were used to purchase of 10 properties across the Corporate Area and several other parishes. Further allegations are that they used the money to invest in their respective businesses.

Evidence strongly suggests that the proceeds of the drug trafficking originated in the United States, where Chang was convicted on narcotics-related charges in 2013.

The three were arrested and charged in 2017 by detectives from the Constabulary Financial Unit of the Counter Terrorism and Organised Crime investigation Branch (CTOC), who are stationed at the Financial Investigations Division.